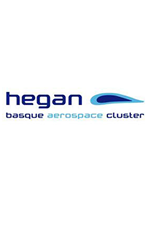 22-07-2013
DANOBATGROUP has become part of the Aeronautics and Space Cluster of the Basque Country, the HEGAN Association, a body created to enhance, promote and boost the Basque aerospace industry. HEGAN now has a total of 38 associated entities, spanning the complete value chain, from engineering, design, avionics, manufacturing of structures, complete subsystems for motors and space,  unmanned aerial vehicle systems , to testing, maintenance, automation and logistics, and to which DANOBATGROUP adds an earlier stage, namely the manufacturing of equipment to produce components and for maintenance, thus increasing the technological capacity of the cluster and expanding the value chain. Joining HEGAN enables the DANOBATRGOUP to strengthen its position in this sector, as it offers opportunities to work together with other partners of HEGAN in several projects and to grow internationally in an industry with favourable  expectations. Furthermore, being part of HEGAN gives access to programs for cooperation, innovation and international promotion in which the cluster association takes part. Approximately 18% of orders of the DANOBATGROUP come from the aeronautics sector with a market share of over 95% of the world market in the sale of equipment to manufacture landing gear and for the maintenance of turbines used in aircraft engines. In 2012, the aeronautics sector stood for nearly 9% of DANOBATGROUP's turnover, mainly destined for export. During this last year, the aeronautical activity provided work for 6% of the total staff. DANOBATGROUP customers include leading manufacturers of engines and landing gear, and most airlines, such as Airbus, Boeing, Rolls-Royce, Snecma, Lufthansa, Iberia, American Airlines, IHI, Aena, Avio, Messier Dowty and Pratt & Whitney