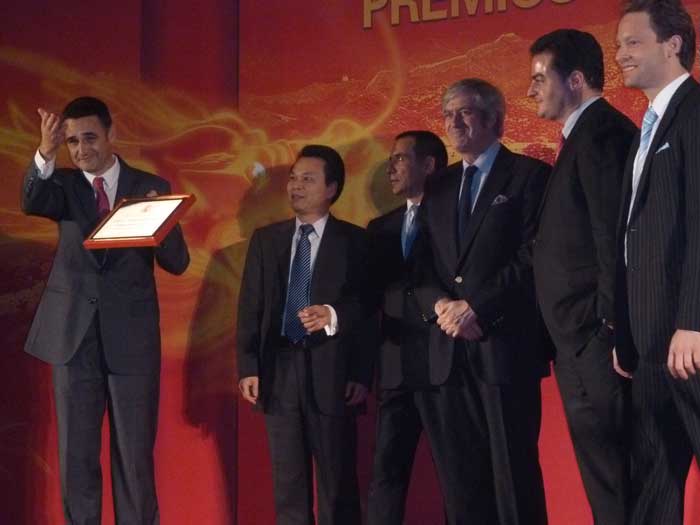 DANOBATGROUP awarded by the Spanish Chamber of Commerce in China

06-11-2013
The Spain's Official Chamber of Commerce in China organised on 2 November in Beijing a high level ceremony for the presentation of the Chamber's Awards, award to acknowledge the work carried out by companies and institutions in the fields of trade, investment or business cooperation between Spain and China. The Chamber presented these Awards for the first time as a way of commemorating the 40th anniversary of diplomatic relations between Spain and China. Awards were presented in four categories: Three by Jury decision -The Dragon Business Award, The Tiger Business Award and The Spanish Institutions Award-, and one by open online vote, with all the companies that operate in China as candidates: The Open Online Vote Award.   For the Dragon Business Award, a category which covers the business projects in China of large Spanish companies with more than 250 employees worldwide, the jury decided that the first presentation of this Award should go to Mondragon Cooperative Corporation. The Jury, made up of members of the Chamber's Governing Board took into consideration the following reasons and assessment criteria: MONDRAGON is nowadays one of the main Spanish industrial groups, employing 82,000 people. At the end of the 70s, the first exports of the Group's companies went to China, by the middle of the 80s it had its own offices in Hong Kong and Beijing, and at the beginning of the 90s, its first production facilities were implemented, initially with local companies. Currently, Mondragón Cooperative Corporation has 44 operational units in China: 19 production plants, 10 of these in the ‘MONDRAGON Kunshan’ Industrial Park in Shanghai, as well as 19 Sales offices and 6 Purchasing offices with 3 Corporate Branches: Beijing, Shanghai and Shenzhen. In total, more than 1500 people, including 45 expatriates and with sales of $340 million in the last financial year of 2012, which all adds up to what is currently the biggest operational network of a Spanish company in China and explains why the Jury decided to award Mondragón Cooperative Corporation the Dragon Business Award, which was presented by the Chamber and collected by Mr Josu Ugarte, President of MONDRAGON International. For the Tiger Business Award, a category that covers the business projects of Spanish companies in China that have more than 10 and up to 250 employees, the jury decided to award it to El Corte Inglés Shanghai Ltd. For the Spanish Institutions Award, the purpose of this award is to acknowledge the work carried out by a Spanish institution in the field of trade, investment or business cooperation between Spain and China, this first award was presented to IVEX Shanghai, which was the first Spanish institution to open its offices in Shanghai in 1997. The Open Vote Award of which went to the winner of this 2013 first award: DANOBATGROUP China. The award meant that the DANOBATGROUP was a double winner, as it had participated in the 1st jury prize being one of Mondragón's pioneering companies in China, where it has been present for 25 years, 21 with its own Branch. And this is why it was acknowledged by the other companies that operate in China, and they granted it an acknowledgment in addition to the Dragon Award. The Managing Director of DANOBATGROUP, Iñigo Ucin, dedicated the award to the Branch's Chinese team, to those in the Group's cooperatives that support projects in China and, also, those responsible for managing the Chinese market at DANOBATGROUP's head offices. In his speech, Mr Ucín emphasised the long and successful history of DANOBATGROUP in China 'We are where we are after 21 years of work in this market', and highlighted the strategic importance that the Chinese market has for the group 'China has been either the first or second largest market for our machines in recent years'. It should be pointed out that this award attests to the fact that the MONDRAGON Corporation and its cooperatives are successfully growing in difficult markets like China and are a management benchmark for other companies.     The award presentation ceremony, organised at the Marriot Beijing City Wall, was attended by outstanding Chinese officials, the Spanish ambassador in China - Mr. Manuel Valencia-, the Economic advisor - Mr. Javier Serra-, other leading Spanish figures and representatives of the main Spanish companies in China.