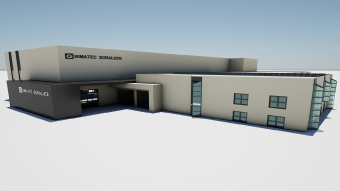 04-11-2011
SORALUCE, which specialises in the design and manufacture of milling-boring machines and milling centres, is to invest 6 million Euros strengthening its BIMATEC-SORALUCE delegation, in Limburg, Germany, with the aim of reinforcing its presence in the country, extending its installations and projecting an image to the world of its success in that country. Soraluce is part of the DANOBATGROUP, the machine tool division of MONDRAGON Corporation. Its German headquarters’ showroom is currently 1,300 m2 in size, and this is to be extended by 2,500 m2 in June 2012. In addition to the showroom extension, its current offices are also to be extended by 1,900 m2, which house administrative and customer support services in order to promote its activities. But the most noteworthy aspect of the changes will be its new showroom capacity, a 10 m crane height will allow the Guipuzcoa firm to present its 8 m high machines in this market. SORALUCE has been present in Germany for 20 years, where it manages its customer relations, accounts, installation and after sales services, etc. Fruit of its work over the years is its install base of 800 machines with leading customers. At the end of 2008 it started extending its delegation in order to maintain and increase its lead in this market, and consequently in the rest of its export markets. The Managing Director of the Guipuzcoa firm, Rafael Idigoras, indicates that “Germany is of fundamental importance right now in economic, political, technological and industrial terms'. It is the leading consumer and producer of high technology machine-tools. The start of works coincided with the recent EMO machine-tool fair in Hannover , and are expected to be inaugurated in 2012, SORALUCE’s 50th anniversary, for which different events are being organised.