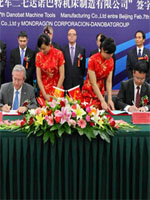 18-06-2012
DANOBATGROUP has signed a JV contract with the Chinese railway equipment manufacturer ,Beijing Feb. 7th Trasportation Railway Equipment Co. Ltd., owned by CNR Corporation Ltd., to manufacture equipment for the maintenance of the Chinese railroad rail treads. Through this Joint Venture, DANOBATGROUP aims to increase sales of railway equipment in China, by supplying the equipment that the Chinese Ministry of Railway plans to acquire in the coming years to maintain the new subway lines, suburban trains and high speed trains that are currently constructing all along China . The new joint venture will begin manufacturing under-floor wheel lathes to install in the maintenance shops of the Chinese Ministry of Railways . With the commissioning of this company, DANOBATGROUP expects to duplicate its turnover in the Asian country, where the group has 28 years of experience and which has become the first market for the Group, surpassing Germany. The joint venture signature ceremony was held at CNR headquarters in Beijing. The contract was signed by the General Directors of DANOBATGROUP and FEB 7TH BRE, with the presence of the presidents of CNR and MONDRAGON CORPORATION, several Directors of the Chinese Railway Corporation and several vice presidents of the Mondragon Corporation. The Economic Counsellor of the Spanish Embassy in China endorsed the event with his presence.