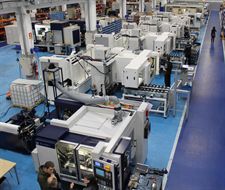 21-01-2011
The General Assembly of the two cooperatives recently agreed to incorporate Estarta into Danobat with the aim of 'increasing competitive capacity on the market'. Thus, a business integration process comes to an end which was initially started to gain a greater dimension to enhance competitiveness on the world market.  Estarta, a manufacturer of centreless grinding machines, integrated into the Danobat Group in 1996. Unity is strength DanobatGroup has moved away from being a group made up of several brands to a company cluster boosting its most powerful brands: Danobat and Soraluce. As a result of this integral binding force, the DanobatGroup transmits a unified vision to its clients and the market. Moreover, the group now ranks among the world market leaders in the machine tool sector at number 30. DanobatGroup is the Machine Tool division of the MONDRAGON Corporation. The Group employs a total of 1173 people, of whom 197 are stationed in production plants abroad:  Newall UK in the UK and Overbeck and Bimatec-Soraluce in Germany. Furthermore, the Group has branch offices in France, Italy, United States, Brazil, China, India and Japan. The most common products of the Group are: grinding machines, lathes, saws and drilling units, milling centres, punching and folding machines, and specific equipment for the railway sector. The MONDRAGON corporation is structured round 4 areas: Finance, Industry, Distribution and Knowledge, and is the largest business group of the Basque Country, ranking seventh in Spain. In 2009, the turnover stood at 15,000 million euro with an average workforce of 85,000 people.