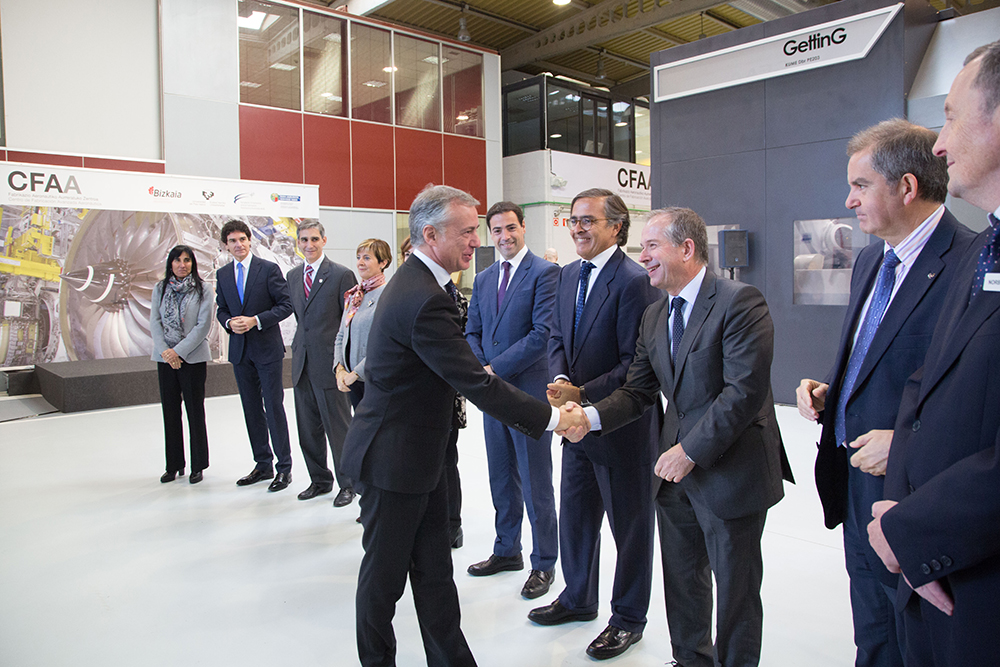 DANOBATGROUP took part in the launch of the CFAA, a space for promoting technological development in the aeronautics sector

The aeronautics sector is continuously evolving. The manufacture of aircraft and components requires a constant and resolute commitment to innovation and the development of new manufacturing processes, materials and technologies that enable progress to more efficient and less polluting aviation.

In this context, the machine tool manufacturer DANOBATGROUP, the University of the Basque Country (UPV/EHU), the Basque Government, the Provincial Government of Bizkaia and several companies in the industrial sector have set up the Aeronautics Advanced Manufacturing Centre (Centro de Fabricación Avanzada Aeronáutica (CFAA)).

The event, which was chaired by the president Iñigo Urkullu, was attended by the managing director of DANOBATGROUP, Pello Rodríguez, and the director of Innovation of the Group, Antxon López Usoz, as well as numerous authorities and representatives from the private sector.

The CFAA is the result of an alliance between public bodies and various companies from the aeronautics and manufacturing field. It has the mission to advance the development of technologies applied to the aeronautics sector and carry out research projects in the pre-production phase to achieve a rapid transfer of the results to the private sector.

DANOBATGROUP has been fully involved in this project. The Group is one of the founders of the initiative, in which it is participating as a type A partner, the highest category which only contains the aircraft engine manufacturer, ITP.

Moreover, the participation of the UPV/EHU ensures the link with the academic world. Therefore the space will also be used to promote the creation of highly qualified professional profiles and generate knowledge applicable to the needs of the industry.

“DANOBATGROUP is a group that specialises in high added-value manufacturing solutions for sectors that demand high quality standards such as aeronautics. Our involvement in this project arises from our commitment to establish close and long-term relationships with our customers”, said Pello Rodriguez.

The industrial group works with top companies such as General Electric, American Airlines, Rolls Royce and Pratt & Whitney and develops solutions for the manufacture and maintenance of critical components for the turbines of aircraft engines, such as the rotor, the stator, the blades and the main shafts. It also offers solutions for the landing gear.

Furthermore, DANOBATGROUP specialises in the design of advanced manufacturing processes and specific equipment that incorporates the latest technologies, characteristics that make it possible to guarantee compliance with reliability, production and quality requirements that are demanded by the aeronautics equipment manufacturers and maintenance companies.

For Pello Rodriguez, the CFAA will allow both the development of projects that are already in the production phase and the opportunity to build bridges between the academic community and the private sector.

“This centre is the result of a commitment to creating collaborative manufacturing environments between company and university with the support of the public administrations, which have contributed to the financing of this space. It will also allow us to move forward in the creation of qualified profiles”, he added.

The CFAA is equipped with state-of-the-art equipment, among which the DANOBAT TV-1500 vertical lathe stands out. It is a 4-axis vertical lathe with hydrostatic guidance, double block and two automatic tool changers, one on each side of the machine. This solution has been specifically conceived for the manufacture of housings and discs.