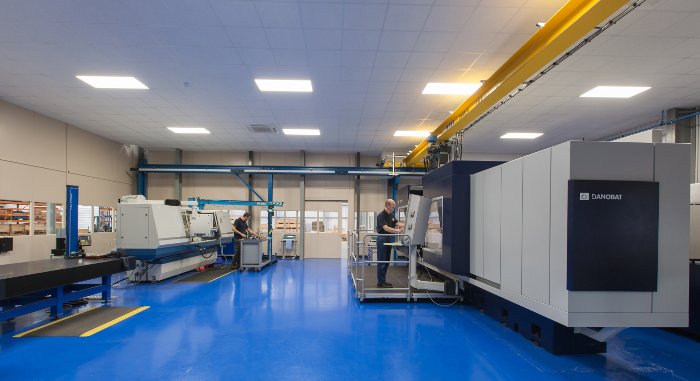 Lymington Precision Engineers has gained a reputation over its 30 year history of being a ‘can do’ organisation, growing to a £50 million turnover business on the back of targeted investment in people and manufacturing technology. Now under the wings of the Senior PLC as a member of its Flexonics Division, LPE is continuing to invest and diversify as well as increasing the capacity for existing customers within the Oil & Gas, Telecommunications, Aerospace and Defence, Land and Sea Systems, Nuclear and Marine industries.

In the past 12 months LPE, which is accredited to ISO 14001 and 18001 and is working towards AS9100, opened a second manufacturing location, this additional 30,000 ft2 facility takes total floorspace to 121,000 ft2 and enhances the company’s ability to project manage large, low-volume components on machines with up to 4 m capacity as well as higher volume work on its two flexible machining systems. All of its work tends to be high-tech, high-added value, working with difficult to machine materials to tight tolerances. Within the new facility is a purpose-built, temperature-controlled, environment for its latest machine tool investment, a Danobat HG-72-3000-B11, a universal heavy-duty grinding machine. This 3000mm between centre machine is capable of grinding diameters up to 640 mm weighing up to 1.5 tonnes and, the integrated torque motor on the CNC-controlled B-axis allows the machine to carry out a wide range of grinding functions, including external and internal grinding, thread grinding. The machine’s wheelhead is powered by a 45kW motor that generates peripheral speeds of up to 45 m/s on the machine at LPE, with a maximum wheel diameter of 610 mm.

The new Danobat machine was purchased to support a long-term commitment by a longstanding customer, which will be part of a 10-year project for LPE. While this work takes priority the additional capacity created will allow new work, that couldn’t previously be ground, to be won. “The Danobat HG-72-3000-B11 is probably the largest capacity universal CNC grinder available for sub-contract work in the UK and having it should open up a number of opportunities for us. It is also a very accurate machine that will allow us to grind very large components, many with thin wall sections, to tolerances of 0.01mm,´ says Nathan Davies, New Product Development Manager, Lymington Precision Engineers.

While LPE already had a wide range of grinders at its disposal, this is the first Danobat machine that it has purchased, and initially Nathan Davies was looking at ‘sticking with what he knew’. However, a visit to the Danobat factory quickly convinced him that it was time for a change. “We gave our existing supplier and Danobat three challenging parts to look at, and while the former would only talk about additional cost involved, Danobat simply got on with developing the process, they provided additional cycles for internal thread grinding including probing cycles and they committed to working closely with us throughout the project. Some of the parts have bores up to 1.1metres deep with wall thicknesses down to 2 mm, we are now able to grind these to tolerances of 0.02 concentricity and 0.01 on diameter to surface finishes of 0.4Ra. Danobat took on responsibility from start to finish and offered solutions to problems, not simply fixed ideas. This gave us the confidence that we had chosen the right supplier as we could blend our knowledge of the parts with their experience in grinding.´

The detailed planning by LPE ensured that the machine arrived and was installed without issues and virtually every contingency has been accounted for, with LPE specifying a wide selection of work steadies and ancillary equipment with the machine. To cover all internal grinding applications LPE ordered five spindles, with one having the shaft manufactured from carbon fibre, due to the extreme diameter to length ratio. Also fitted to the Danobat HG-72-3000-B11 grinder is an MDM Danobat Absolute Measuring Unit. This is designed for in-process gauging and enables LPE to measure a wide variety of diameters whether they are solid or intermittent surfaces. Once the grinding cycle is complete, before removing the part from between centres, it can then check, post-process, for diameter, faces and geometry within the complete mechanical working range of the machine.

Typical of the partnership that developed between LPE and Danobat were specific machine modifications that were made, such as the dual coolant system that allows LPE to quickly switch from the ‘clean’ coolant required for its long-term customer’s work to regular coolant for general work. Also, the machine’s internal covers are all manufactured from stainless steel, again to prevent contamination of parts. Service support was also a vital element in the decision making process and the fact that Danobat has UK-based service engineers who can be called on at any time was further reassurance for Nathan Davies.

“Working with Danobat has been an unexpected bonus, they are a company that is open to challenges and their engineers were willing to change and develop ideas in partnership with us. And, while the price of the machine was important, we presented them with lots of ‘what if’ scenarios Danobat took them all in their stride, gave us a fixed price for the machine, including software support in terms of writing new grinding cycles if we need them during the first 12 months. We added to the pressure further by not being able to fully divulge many of the part details in the early stages due to confidentiality clauses and when our customer put pressure on us to commence manufacturing Danobat pulled delivery of the machine forward by two months. The result of the close working relationship between LPE and Danobat means that we have achieved something quite special in terms of grinding capability,´ says Nathan Davies.