DANOBAT received a major order from Bergen Light Rail for the delivery of a train shunt measuring system.

The project is part of the Bergen program for transportation, and the urban development and environmental plan, which is a joint effort to coordinate and prioritise public transport, environmental issues, construction of road, pedestrian and cycle paths over the twenty year period 2005 to 2025. 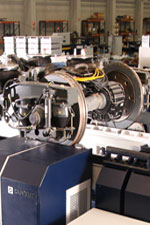 04-01-2013
The railway division of DANOBATGROUP will hold an Open House during the month of March in its manufacturing plant located in Bergara. During the event the new development of the Dynamic Bogie Test Rig DANOBAT DTR-25 will be shown to manufacturers, maintainers, operators and other interested railway…
Events
Dtr-25, Danobat railway systems, Open house, Railways, Dynamic bogie test rig,