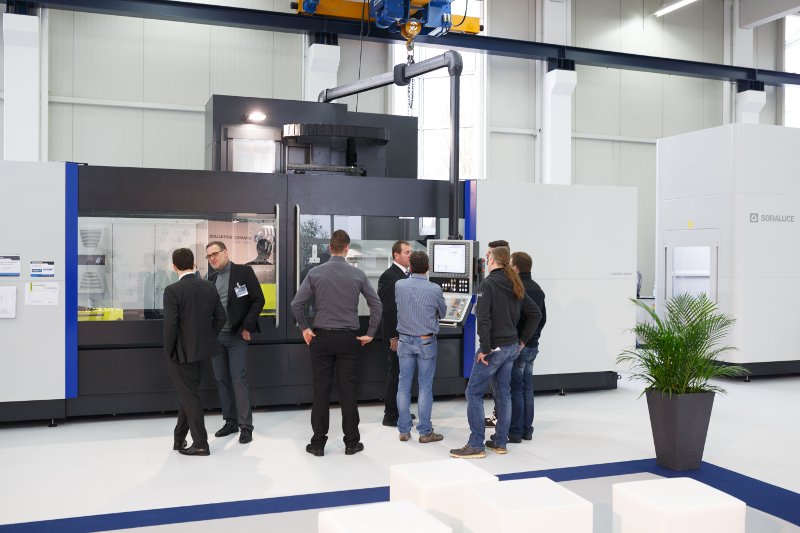 The tour also included demonstrations of other technologies applied to SORALUCE machines, aimed at improving productivity, precision and multipurpose, such as the dynamic CNC Ram Balance system , which interchanges the modular quill spindle with the machine´s other heads totally automatically, which allows for different quill spindles with different diameters and lengths. The SORALUCE DHC new dynamic head calibration or the ADAPTIVE CONTROL feed adjustment system were in the spotlight on the tour.

SORALUCE unveiled the full range of the new generation of milling, boring and multipurpose machines

The new generation is the expression of the SORALUCE values: reliability, accuracy and competitiveness. Within these concepts, the customers find huge improvements in maintenance, ergonomics, high dynamics and the safety of the working environment.

The new SORALUCE generation is based on a comprehensive review of the machine from the perspective of the user, focusing on making the functioning more efficient and developing a Total Machine concept. This concept not only takes into account the machine, but also the entire work area. All the interactions of the operator with the different elements of the machine are analysed for an optimum application. The evolution in the design has made the machine easier to operate and maintain, with a safer and more ergonomic working environment for the operator. SORALUCE was recently awarded the Red Dot 2016 award for this innovative design.

SORALUCE is a step ahead with its SMART MACHINES

The SORALUCE Smart Machines had a prominent position in the demonstrations that took place in the Technology Days 2016. These milling and boring machines include technological elements within the Industry 4.0 concept, which become a reality in a comprehensive monitoring package based on “cloud computing´.

They include features such as the displaying of the machine status in real time with relevant information on the situation of the machining tooling in progress and the sending of emails in the case of a shutdown; the generation of reports on sensitive issues for the user such as production or process, such as energy consumption or the performance of the machining cycles; and the diagnosis of key warning signs for the maintenance of the facilities. This is all carried out by means of secure connections using a PC or any mobile appliance with simple web access to Internet.

A quarter of a century has already passed since the setting up of BIMATEC SORALUCE, a commercial-technological venture that is celebrating its 25th anniversary with the satisfaction of having turn into reality the dream of progress that inspired its founders: to turn the German market into leaders and to offer groundbreaking solutions to its customers.

BIMATEC SORALUCE was established in 1991 with the mission of introducing the SORALUCE product and brand in Europe. The union meant that strength and commitment that united SORALUCE with its German partners, Walter Markuske and Fred Bisgwa, was a real long-term commitment that has proven to be a total success.

SORALUCE initially marketed its machines in Germany under the “Soramill´ brand, an initial step in the progressive evolution of a range that has been steadily consolidated and it now leads the milling and boring machine sector on the German market, with more than 1,000 machines installed among benchmark customers. This endorsement has allowed the company to expand across the continental frontiers, so that BIMATEC SORALUCE is the SORALUCE Centre of Excellence, which is fundamental in the world positioning strategy and which is already firmly established in 45 countries.

After its successful implementation in Germany, SORALUCE has already overcome its “outsider´ status, of a mere supplier of machinery, and has taken a step further to becoming a real market driver, an active technological player that develops new and increasingly more efficient applications, contributes value added to products and services, and from its leadership position, its guides its customers along the path of innovation. In this regard, the creation of the BIMATEC SORALUCE Centre of Excellence at its Limburg offices has been crucial. It is a fundamental platform to continue to offering ground-breaking solutions on the international markets. This centre was refurbished and expanded in 2012, coinciding with SORALUCE’s 50th anniversary and it was fitted out with 2,500 m2 of showroom and 1,200 m2 of office space, which includes the Technical Assistance Service Department, Training rooms, Project Management Department and Technology Department.

BIMATEC SORALUCE is now experiencing a boom and aspiring to continue to lead the milling and boring sector during the coming 25 years, while continue to be faithful to the precepts that made its successful possible: mutual trust, the will to succeed, joint effort and a clear customer orientation.

SORALUCE Academy is a place where customers can contact experts in different areas to share, learn and implement solutions and projects. SORALUCE provides the means for our customers to consolidate their knowledge by means of a series of standalone seminars, workshops and master classes, specific for each industry and with the emphasis on the practical aspects.

To turn this training proposal into reality, SORALUCE has the necessary facilities, rooms for seminars, a heads laboratory, an R&D&I department and a research centre, along with rooms for seminars and testing teams at the Centre of Excellence in Limburg, Germany. SORALUCE organises this type of technological activities internationally with an annual programme where it shares knowledge and skills with the customers, by developing higher levels of know-how and use of the equipment that allow the customers to recognise the return on their equipment, enabling the customers to optimise the performance of their products or develop new machining solutions, with new technological developments, peripherals, etc., and improving the quality and scope of customer relations.

The Technology Days 2016 provided a perfect set of opportunities for the SORALUCE customers. Live technological demonstrations, a good number of workshops every day, the 25th anniversary celebrations and a comprehensive display of its service capacity illustrated in different case studies set out in detail. SORALUCE tailors its work to the needs of each customer. It’s Services and Solutions Department develops comprehensive special project, by working closely with our R&D&I equipment and our research and development centre.

Xabier Mendizabal, SORALUCE’s R&D director, pointed out: “The market is constantly evolving and the requirements of the customers are increasingly more demanding. At SORALUCE, we are constantly striving to develop new solutions such as multitasking machines, automated systems, solutions for large components, technologies to improve productivity and the accuracy of our milling, boring and turning range, such as the prize-winning DAS system, which is complemented with the new development for tooling.´

“Ahead of its time´ is this year’s slogan for the SORALUCE Technology Days and it perfectly summarises the set of technology on show at the BIMATEC SORALUCE Centre of Excellence throughout the week.

The European brand has a proven track record. A clear example of this are its more than 2,500 machines sold, nearly half of them in Germany, a very demanding market where, as has been seen down through the years, 80% of customers have placed their trust in its products. This year, SORALUCE is marking 25 years leadership on the German market and 15 years as the benchmark in technology on the Italian market.

SORALUCE is part of the DANOBATGROUP, the machine-tool division of the MONDRAGON Corporation, one of Europe´s most important business groups. With nearly twenty first-rate manufacturing plants in Spain, Germany, the United Kingdom and the USA, it also has its own R&D centre where 120 engineers and 24 PhDs work. DANOBATGROUP meets the needs of its customers with one of the most competitive and comprehensive multi-technological ranges on the market. With a workforce of 1,300 people, it posted a turnover of around EUR 269 million in 2015, which has led to its high level of investment in R&D&I, which accounts for 8% of its turnovers.