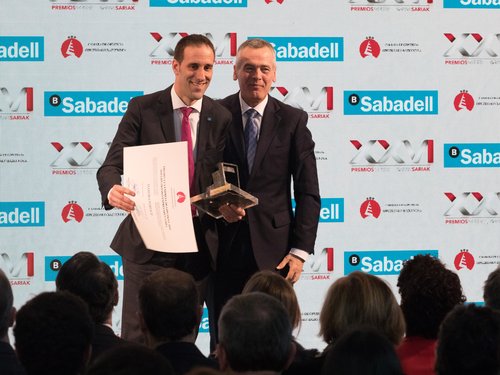 The DANOBATGROUP business group specialises in the manufacture of machine tools and advanced production solutions and has been recognised as the Best Gipuzkoa Company 2018 by the Gipuzkoa Chamber of Commerce.

The award was collected this morning by the managing director of DANOBATGROUP, Pello Rodríguez, at a ceremony attended by the Minister for Economic Development and Infrastructure of the Basque Government, Arantxa Tapia, and Chairman of Gipuzkoa Council, Markel Olano, among other dignitaries.

The prize jury, made up of the Chamber´s Executive Committee, decided to award this prize to the Elgoibar based cooperative group "for its innovative DNA". Furthermore, it noted that DANOBATGROUP has carried out a "conceptual transformation of its products" that has allowed it to move "from machine tools to advanced manufacturing solutions, turnkey production lines and state-of-the-art services in the digitalisation field".

The jury members also assessed "the process of incorporation of information and communication technologies in manufacturing environments" undertaken by the Basque group, which has led to the breaking of the "physical barriers constraining machine tools".

"DANOBATGROUP has successfully proposed manufacturing solutions with advanced machines and intelligent turnkey lines with a level of technological challenge and scope unimaginable a few years ago" decided the jury.

The prize awarded today at the headquarters of the Gipuzkoa institution located in Donostia is added to other prizes previously awarded by this Chamber of Commerce to the cooperative group in the internationalisation category in 1996 and 2009.
After receiving the prize, Pello Rodríguez said that the award represented the recognition "of the commitment to innovation of the DANOBATGROUP, a group that is always seeking new challenges, new solutions, new markets and new business models".

"These prestigious awards recognise an entire business track record and the people that have made it possible. Our team is one of the most important aspects of our identity, which is marked by research and anticipation of future challenges, as well as cooperation both internal, between different business units that make up the group, and external", he added.

Commitment to the environment, international outlook

With strong local roots and a great commitment to the development of its area of influence, DANOBATGROUP is made up of a total of six cooperatives (DANOBATGROUP, DANOBAT, SORALUCE, GOITI, GOIMEK and LATZ) and a technology centre (IK4-IDEKO).

The group employs more than 1300 people who are highly qualified and fully identify with the business project, but it is also linked to the generation of wealth and employment in its local environment, where it has a full network of suppliers distributed throughout the Basque Country and it collaborates with cultural, social, sporting and environmental initiatives.

This local commitment does not mean the group is not strongly internationalised. 90% of its turnover comes from external markets and it has its own factories in countries such as Germany, the United Kingdom and United States, as well as offices in other locations such as India, Russia, Australia, China and Italy, and it will be reinforcing its presence in the last two over this year.

The introduction of digital technologies into industries has led to a revolution in manufacturing processes through the optimisation of production systems, constant real-time monitoring of machinery by the capture, processing and interpretation of data from the equipment and better adaptation to customer requirements.

In this scenario, DANOBATGROUP has become a benchmark thanks to its digital value proposal that it has developed, and which includes the Smart HMI. This interface assists the operator in the operation of the machinery and allows access to information on the state of the equipment and its operation.

The group has also created the Data System, a set of services based on Big Data technologies that allow the situation in machinery to be known in real-time, failures to be prevented and its operation to be optimised.

The Control System can also be found under this digital umbrella, which manages automated manufacturing lines and Intelligent Components - devices built into the machine that enable the precision, reliability and productivity of the machinery to be improved.