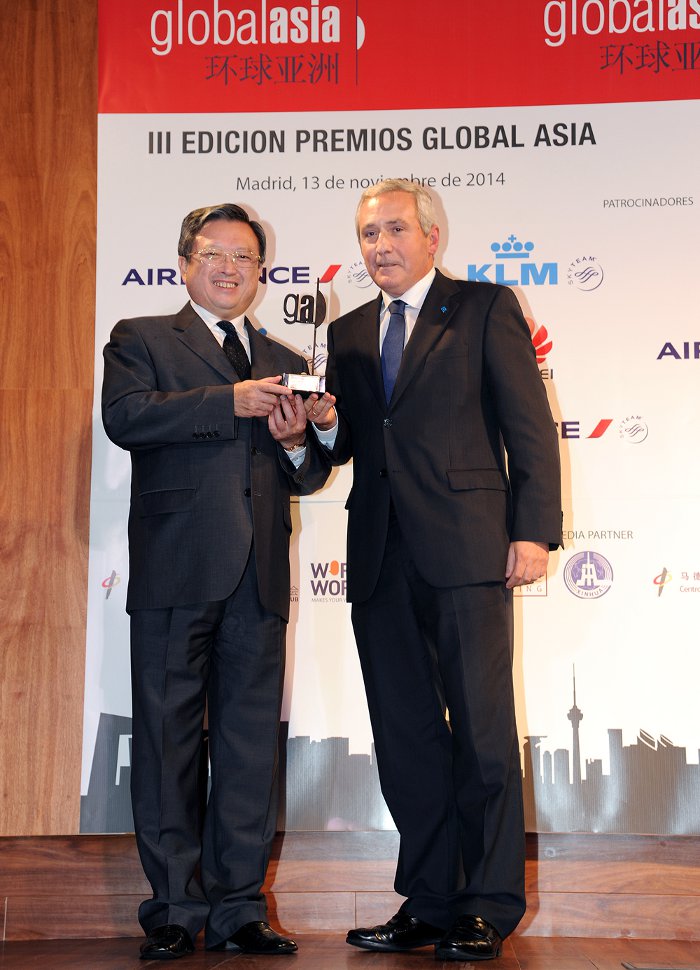 DANOBATGROUP awarded with the Business 2014 of the Global Asia Awards

14-11-2014
Iñigo Ucin, Managing Director of DANOBATGROUP was awarded the “Spanish business in China 2014' award by Global Asia for the group's excellent work over many years and for its success in a market as complex as the Chinese market. The prestigious Global Asia award, currently in its third year, recognises organisations that contribute most to improving business, institutional and social relationships between Spain and China. Also awarded were Mr. Wang Jianlin, President of Wanda Group, and Professor Ramón Tamames, one of Spain's most influential economists and author of several books on China. In the words of Ivan Mañez, founder and director of Global Asia, during the awards ceremony, DANOBATGROUP is without a doubt a model for any Spanish company wishing to achieve success in China, and a clear example of a company that has understood the importance of “becoming Chinese' to do business in China. For DANOBATGROUP the award is recognition for its long history in the country, and motivation to continue on the same path in years to come. China is a key market for the group, where it has operated for over 20 years with an established local team of 30 people. With almost 600 machines installed in the country, its local experienced team is aware of Chinese customer's specific needs, and perfectly aware of the European cutting edge technology used in machines produced by DANOBAT and SORALUCE, these factors enable DANOBATGROUP to offer its Chinese customers global technology with local know-how, service and availability. The key to the success of DANOBATGROUP in China is its people, without a doubt its most valuable asset in the country.   The award ceremony was chaired by the Ambassador of PRC in Spain, Zhu Bangzao and was held at the Chinese Culture Center of Madrid. Prestigious companies and personalities, fundamental to the relationship between Spain and China, were awarded at previous editions of the Global Asia awards. Including Zhu Bangzhao, Chinese Ambassador to Spain, Juan Antonio Samaranch, Eugenio Bregolat, Agencia Xunhua, Banco Santander or ICBC, amongst others. About Global Asia Is an internationally renown knowledge enterprise that specialises in Asian and Hispanic economics, business, technology, cultural and social matters, connecting Asian and Spanish-speaking peoples. Founded in 2008, it has a network of over 200 collaborators expert in each area covered, be it economics, companies, banking, culture, legal issues or marketing in order to provide a realistic and broad view of the relationships between China-Spain-Latin America.