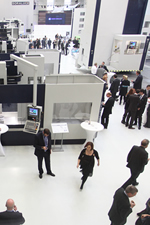 22-11-2012
BIMATEC SORALUCE, Germany’s leading milling and boring enterprise and SORALUCE’s hub company in Europe, opened a new technology centre in Limburg, Germany, on 16 November 2012. BIMATEC SORALUCE has more than 20 years of market experience and over 1000 machines installed in the market. With the aim of strengthening its presence in Germany, extending its facilities and projecting its image worldwide on the basis of its success in this country, BIMATEC-SORALUCE has increased its showroom facilities by 2500 m2, which will allow machines with vertical travel of up to 8 m to be displayed. It has also extended its offices by 1200 m2, which now include a technical assistance department, training classrooms and project management and technology departments. This investment has given rise to new possibilities for developing applications and machining tests. 'Our investment in the technology centre and the research and development capacities has given rise to strengthen our competitive position, clearly setting us apart from the rest,' Fred Bisgwa, one of BIMATEC SORALUCE’s two Managing Directors, explained at the opening ceremony. Daniela Vukovic, a renowned german presenter, chaired the official opening event, which was attended by around 300 guests from business and politics worlds. Speakers included Richard Martin, the Mayor of Limburg, Rafael Idigoras, the Managing Director of the Basque partner company SORALUCE, and Rafael Barrenechea, the former Managing Director of SORALUCE and former Managing Director of DANOBATGROUP. In their speech, BIMATEC SORALUCE’s two Managers Fred Bisgwa and Andreas Lindner thanked the Basque partners for their long-standing cooperation and stressed the strategic importance of the new technology centre for the company’s future success.
'This new centre will create 30 new jobs in Limburg and will pave the way to even further growth for the company', BIMATEC SORALUCE’s other Managing Director Andreas Lindner explained. The new training centre will enable the firm to help young people embark on technical careers and contribute to solving the problem of the lack of qualified staff. 'Our training workshop will offer professional opportunities to young people and we will be able to make up for the lack of qualified staff with our own apprentices', Mr. Lindner added. This is another of the Limburg location’s strong points. In the words of Rafael Idigoras, the investment will not only strengthen and provide future projection to BIMATEC SORALUCE’s leadership in the German milling sub-sector, but also widen the footprint of the SORALUCE brand worldwide and give it the strength and credibility to become another example of the growing, excellent business relationship between the Basque and German companies. The event also featured performances by world-famous Basque soprano Ainhoa ​​Arteta, who has sung at venues including the New York Metropolitan Opera, and the comedian Dr. Jens Wegmann.