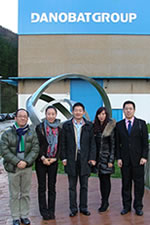 04-12-2012
DANOBATGROUP received from 26 to 30 November the visit of Hang Lu, Peng Shao Hu Jia Fang and Cheng Chun Chun Fung, four renowned Chinese journalists representatives of the most important Chinese machine tool magazines: Modern Metalworking, MM MaschinenMarkt, metal Working and Chinamac Journal. The journalists had the opportunity to see in first-hand the different facilities of the group in Germany and the Basque Country as well as the Mondragon Corporation. Likewise they had the chance to interview Iñigo Ucín, General Director of DANOBATGROUP, and Oscar Urdangarin, Sales Director of the group. At the end of their stay the journalists have emphasized how impressed they were about the technological excellence, visioning and high capacity of the group. The visit was one of the activities promoted by the Chinese delegation of DANOBATGROUP in Beijing, as a pre-show campaign of the CIMT exhibition which will be held from 22 to 27 April 2013, and where DANOBATGROUP will be present.