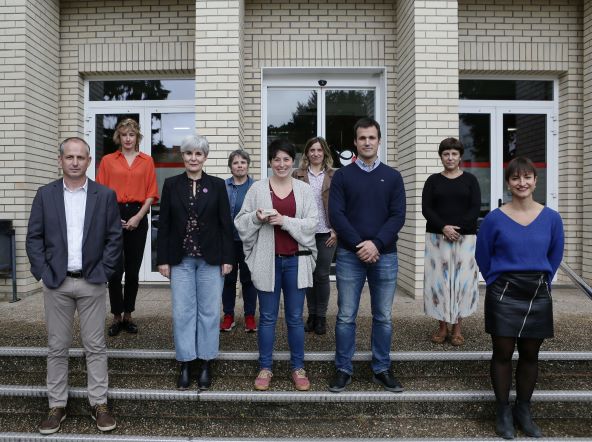 Equal opportunities and the development of people are two essential pillars on which Danobatgroup bases its philosophy. For this reason, the industrial group participates in various initiatives to promote STEM vocations. In this sense, for the second year, the industrial group is once again collaborating in the organization of the Gladys Award, an award that seeks to recognize the work of professional women in the digital environment and to disseminate their work, as well as to create references for young people in the field of information technology.

The machine-tool manufacturer has been present at the prize-giving ceremony, which this year was awarded to Olatz Perez de Viñaspre, professor at the UPV/EHU´s Faculty of Computer Science.  In addition to the collaboration of Danobatgroup, the Gladys Saria is promoted by the PuntuEUS Foundation and the UPV/EHU Faculty of Computer Science, and is sponsored by the Body for Equality of the Provincial Council of Gipuzkoa.

The jury, which made the decision unanimously, highlighted the winner´s academic career and her work to respond to major social challenges. Perez de Viñaspre has been awarded 3,000 euros and will have the chance to give motivational talks to young people in educational centers.

With a degree in computer engineering and technical engineering of computer systems, she has a long professional career. She studied a master´s degree in Language Analysis and Processing (APL) and later completed the PhD program in Language Analysis and Processing at the Faculty of Computer Science of the University of the Basque Country, in Donostia.

She is currently an assistant professor in the Department of Computer Architecture and Technology of the Faculty of Computer Science of the UPV/EHU and also works in the world of research. It should be noted that in the VI. edition of the Koldo Mitxelena Awards, in 2018, she received the award for the area of knowledge of Engineering and Architecture. In addition, at the Congress I. Ikergazte: International Research in Basque, she was awarded the Special Prize given by Udalbiltza for working on a topic that is especially important for the development of Euskal Herria.

With 65 years of experience in the field of industrial manufacturing, Danobatgroup employs some 1,400 highly qualified people. The group is an international benchmark in advanced production systems and the machine tool sector.